Since the meeting in August, described below, we held other meetings on September 8th and October 13th.

The Rule of 6 limit for gatherings does not apply to support group meetings like ours, so we will not be ignoring guidance or even the law. However some members may feel that they do not want to risk joining us due to their vulnerabilities, which may not be confined to being a laryngectomee.

We plan a further meeting in November but when we get to December a Zoom meeting will be used to bring us together,

Our plans are subject to modification if the legislation and guidance around Covid changes.

Finally, after 5 months our group was able to meet again. We chose an outdoor location, Holmebrook Valley Park, close to our normal meeting  venue.

The weather was kind to us , though temperatures were high, and we found a shady location. The turnout was high but we missed a few regulars who had medical appointments or other problems.

Since we met in March members have experienced bereavements,  complications after treatment and other issues. It was great to be able to share news and listen to our friends once again.

Members heard of two new laryngectomees we have helped and donations from a couple of regular supporters. Everyone present decided to meet again, in the same location next month. 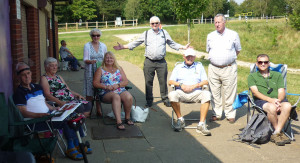