It looks likely that the argument to extend HPV vaccinations to boys has been won, according to the Daily Mail

The Government’s Joint Committee on Vaccination and Immunisation (JCVI) had previously concluded it was ‘overwhelmingly’ unlikely that vaccinating boys would be cost-effective. Its conclusions were based in part on a flawed computer model that wrongly assumed HPV caused relatively few cancers in men. But earlier this month the committee accepted new evidence that HPV causes many more cancers in men than previously thought. In particular it causes up to five times as many mouth and throat cancers as had been estimated.

Last August, NALC responded to the JCVI, following their decision not to extend the programme to boys, and made the following comment:

We were surprised by the statistics about oropharyngeal cancer, in particular the low attribution figures of 12.4% (women) and 24.7% (men). Very much larger % are indicated in the Data for Head and Neck Oncology Report 10, published in 2015 by NHS England. It reported that over 70% of the OPSCC patients tested were HPV positive.

Now that they appear to have accepted the arguments of HPV Action and all parts of the head and neck community let’s hope there is a speedy implementation of the programme. 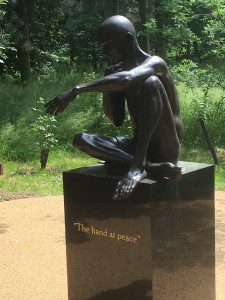 On Thursday we organised a second visit to the National Memorial Arboretum. Since our first trip there were many new memorials to see. Perhaps the most moving was the one from Sapper Support, a charity focused on PTSD, with the sculpture shown above.

Our enjoyment of the day was enhanced by the plentiful sights of nature with terns flying over the River Tame, the nesting coots and Great-Crested Grebes, demoiselle damsel flies in abundance and the Poppy Field in full bloom.

Previously, on Monday, we had a stand at Chesterfield Royal Hospital, with the dual aim of raising awareness of the early signs of head and neck cancer and fundraising for our group. As always there were many interesting conversations.

Professor Mehanna and his team deserve congratulations on their practice-changing study which spare patients from unnecessary surgery.

NALC, as it has done for every NICE committee on head and neck cancer, provided the lay members of the committee.

About 70% of women with the most common form of early stage breast cancer can be spared the “agony of chemotherapy”, researchers say.

It follows trials of a genetic test that analyses the danger of a tumour.

Cancer doctors said the findings would change practice in UK clinics on Monday, and meant women in this group could be treated safely with just surgery and hormone therapy.

As a matter of urgency, research is needed to find similar hormone treatment for patients with cancer at other sites, including head and neck, and if they will have similar benefits.